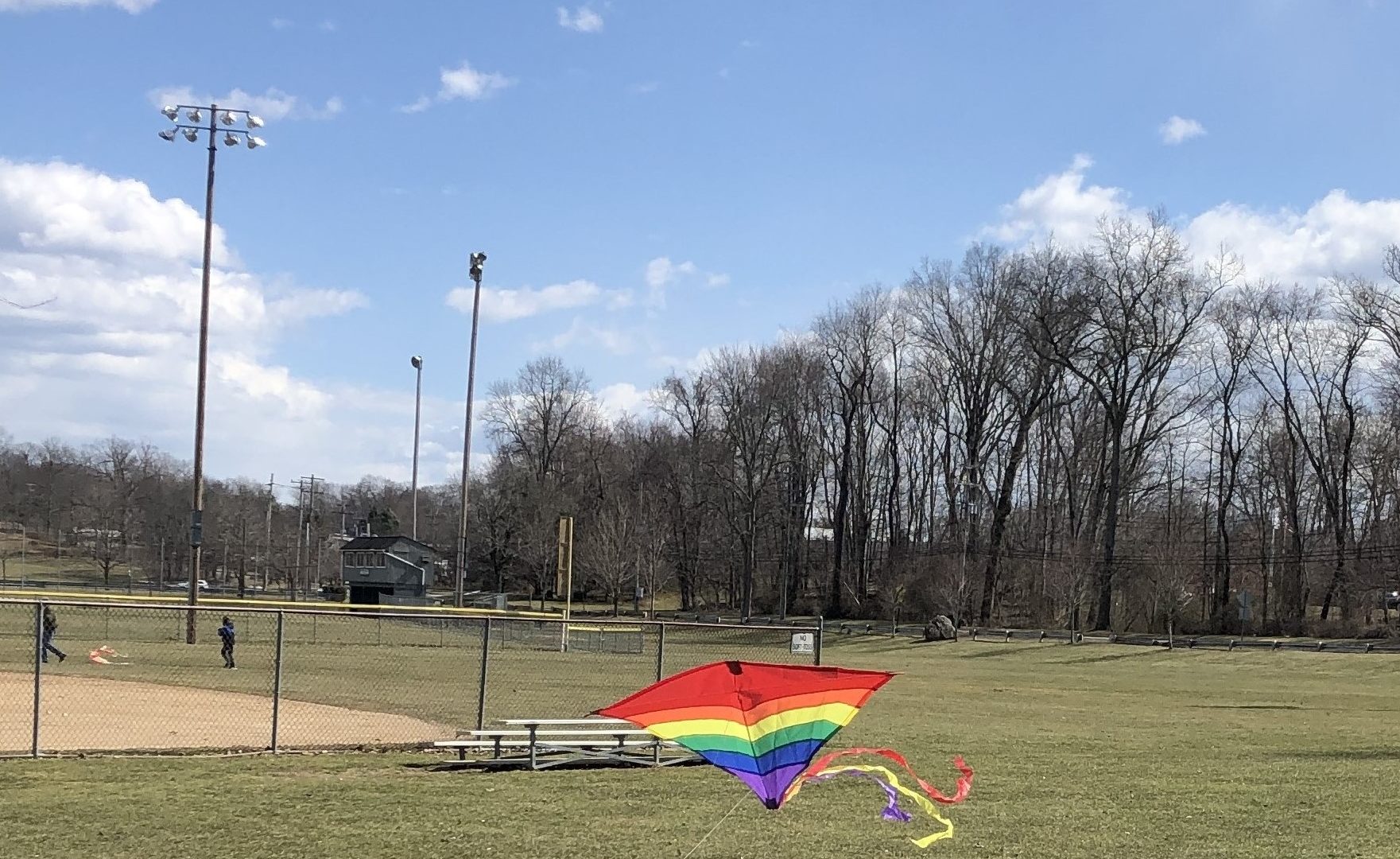 Amongst my various Pi projects, I’d taken the basics of battery power, and a single sensor, and had the idea to put them in the air. Some of my early inspirations in Pi work were high altitude balloon flights, but since ballooning itself is going to be a learning path, I decided to start with something simpler.

To be clear, I picked a $10.99 child’s kite, the kind of thing a parent might order for their kid’s first time kiting. It’s colorful, simple, easy to assemble, and folds up into something you can throw in a small backpack.

After visualizing design with some boxes I ordered for the weather station, I settled on something simpler: the cylinder of a roll of paper towels, reinforced with duct tape.

I cut a panel in the side to make it easier to check connections. I also wanted to have a simple on/off switch, so I included that but ran it on the exterior of the tube – it’s the black cable.

There were some challenges. It was easy for the jumper cables to work loose from the Pi at the angle they required to be fit in the tube. I didn’t like the battery jostling around either, and while ultimately I’d prefer to build a frame, for this mission I just stuffed a long wedge of foam padding into the tube.

We tried at least three different launch sides, and examined but opted out of a fourth. Our first kite flights were at the field of a local elementary school, but the wind was squirrely, largely blocked by large trees that killed the wind and made it change directions randomly. We ended up doing our first real flights at a public athletic field.

First we needed to make sure we could fly a kite. It turns out that flying a kite is pretty darned fun!

Mister Techlemode did most of the flying, but I can tell you when the wind is blowing and the reins are in your hands, it feels like a living thing. The kite wants to go this way, then that. The wind comes and goes, giving the kite more or less altitude. Keeping the kite lined up to take best advantage of the wind was a bit of a trick to learn.

Eventually, we did get the payload attached.The kite kinda shook its head at first.

However, we did get some flight! It was a gusty day, so we just had to wait for the right breeze. We could hear the wind approaching, roaring through the trees, and knew to get ready.

I was so excited! This was a bit of a milestone, as simple as it was. You can see the payload dangling below the kite.

The PiZeroW was attached to an Adafruit BME280 breakout board, meaning it could capture temperature and barometric pressure (also humidity, but I left that out). I had a simple program writing that data to a local .csv file once per minute. My goal was to get basic data locally recorded.

On its own merits, this was not an especially useful mission. First of all, keeping the kite on station was too difficult to park and simply collect data over a long enough period of time to see changes in temperature and humidity. Second, a “flight recorder” is minimum viable product: ultimately I need to learn how to send that telemetry back to a base station.

That said, this was a useful mission because it brought together several disparate workstreams:

Unfortunately, when we got home, I logged in to the Pi and checked the data file, and it had not been updated since our morning tests inside the house. A quick review of the hardware showed a likely culprit: the string I ran through the tube for hanging off the kite had run very close to the BME280 leads, and it may have loosened the VIN (power in) wire from the board.

I made two design changes. First, I used a straw to act as conduit for the string, preventing it from chafing against any wiring directly. Second, I wound some more electrical tape around the leads, which were already taped together; the new tape fastened them lightly to the board itself.

It wasn’t too late in the afternoon, so we drove out to a nearby park with a large field for another flight.

As we walked up a slope to the field, the wind picked up. We were excited! It was blowy enough that we briefly took shelter in the lee of a small building, as rain drops turned to ice drops. A squall blew through, but by the time we had everything assembled, it had passed, and we were left with a muddy, poop-laden field (geese, deer, probably people’s dogs). All the same, we got some flight.

The good news is, this time, we got data. Not a lot, but we did record data. I was able to download the .csv, and after a little massaging in Excel, create a couple of charts.

Generally, during flight, the readings were colder and more humid than on the ground. I haven’t done any sophisticated data analysis, and I was imprecise in recording time of flight times.

All the same, I have data. I put a small computer with sensors in the sky and recovered that data. I have that capability. It’s one small step . . .in a long series of small steps.